This one is NOT from me! I've been loving all the fun Thanksgiving decoration ideas I've been seeing, but this one is going on my Turkey table this year for sure! I first saw these on Be Different, Act Normal. 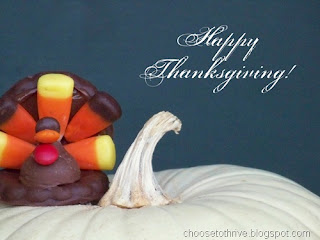 Click here to see the link to the fantastic step-by-step tutorial on Thrive, about how make these cute little guys! I can't wait to make a whole bunch with my own little turkeys this year! Bon appetite!

So today my Feature Friday is all about cowls.

Until a year ago I didn't even know such things existed! (I mean...I did...but I didn't know there was a fashion trend surrounding them...I lead a sheltered life.)

If you're like I was then you may be asking yourself ,"What on earth is a cowl, anyway?"

"The cowl (from the Latin, cuculla meaning "hood and rope") is a hood worn by members of religious orders. It also refers to a long, hooded cloak, with wide sleeves, worn by some Catholic and Orthodox monks when participating in the liturgy. Developed in the Middle Ages, they became the formal garment for those in monastic life. They were worn to give warmth to people who often spent long hours in unheated and drafty churches."

Nowadays, however, cowls are usually a tubular scarf-like accessory, sometimes including a hood, which is worn around the neck to keep one warm, and trendy, during cold fall and winter months.

So here a few of my favorites from Etsy! (Click on the titles to see the shop listings for these items! And don't you just love how artsy the pics are!?! I know!)


Here's a nice hooded one, called Chunky Cowl in Oatmeal, by flutterbyhannah. 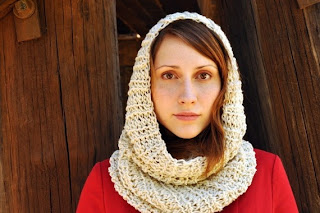 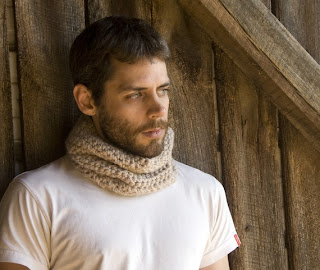 Here's a fabulous cotton one, called The Organic Cowl, by AnaidDesigns. SO...I decided to try my hand at making one of these fashionable, trendy scarves using some fantastic yarn my friend gave me for my birthday! It's super soft, is this amazing mossy green color, and has a mohair look...without the itch...and it's washable! LOVE.

So this is what I made! It's a really simple mesh-style cowl. The yarn is stretchy enough that if you have a small head...like me...you can double it up, or wear it loose! It was surprisingly warm, even though it has a sort of open pattern, too! I've simply called it Chunky Mossy Green Cowl! 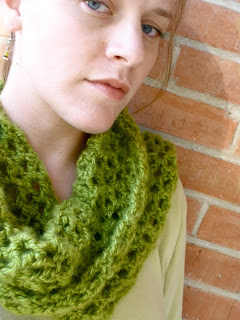 If you're into crochet or knit, I'm sure you can come up with some fun cowls this season, too! Feel free to share any links in the comments! 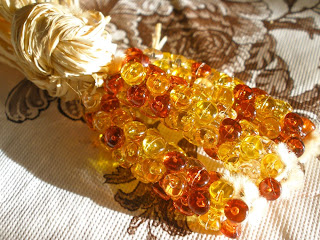 I thought I'd do a little Thanksgiving craft today! This is one I got from Parent's magazine a few years back! It was really fun to do with the kids, and really easy! (If you're interested here's a link to the article from the magazine!)

"Cut the chenille stem in half and form an X. Wrap one stem around the center of the X twice, leaving a short length of the stem. Bend the three remaining stems to form an Indian corn shape." (It looks kinda like a little tripod for a camera!) Sorry I forgot to take pics of this part! Ooops!

"String beads on each of the three long stems, alternating colors. Bend the end of each stem to secure." I put a little dot of hot glue at the end to hold the beads in place better. Then I looped the 'stem' back over itself so I'd have a place to tie the raffia to. 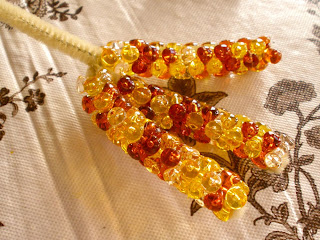 "Knot a piece of raffia around the short stem. Glue a magnet to the back." Again...I hot glued the raffia and magnet to the back to make it a little more secure...this, of course, has to be done by an adult, but the funnest part for the kids is putting the beads on anyway...so they didn't care if I did the 'hard' parts! ;) 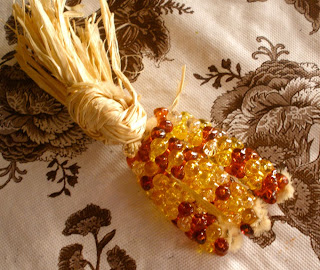 These would make cute party favors or Thanksgiving gifts to neighbors! Have fun!