I had grand plans to do something really festive and fun for this week...but alas! Life sometimes gets in the way of creativity! (I'm sure no one out there knows what I'm talking about. Right?)

Winter is still in full swing here in our little mountain valley home. And the weather has been FREEZING. Actually, BELOW FREEZING. Every night. Joy.

Our kitchen window has been bare ever since we moved into our home this summer...which wasn't too much of a problem until winter hit. Then we started feeling the draft from the window. It was frigid in our kitchen! (Not to mention the fact that the window sill was being used as a catch all for 'stuff'...there's nothing that I hate more than clutter...It drives me berserk!) 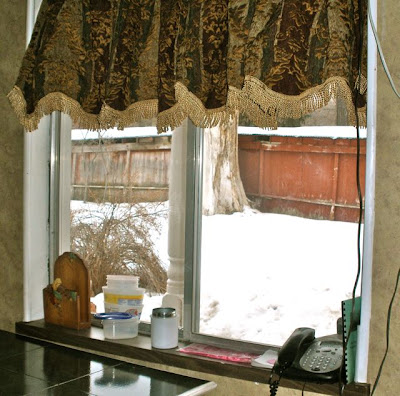 During December and January I just tackily hung a snowman embellished tablecloth over a curtain rod in the window. Yeah. I'm awesome that way.

The thing is we actually had a curtain from our old house that needed to be repaired (It's pair is hanging in over the sliding glass door in the kitchen!)...I just had been too lazy to fix it. Until now. I was tired of that tacky tablecloth hanging over the window...obscuring the view...falling into the kids' cereal every morning...reminding me that I was being lazy.

So today I threw the tablecloth in the wash, and packed it up with the decorations, lugged out the sewing machine, and fixed that dang curtain!

(P.S. I had to throw it a picture of my awesome sewing machine! It was my hubby's Grandmother's machine...I think it's about circa 1970. I got when she passed away, and I love it! It may not have all the bells and whistles of a newer machine, but there's something really cool about using the same machine someone you loved used to use. Plus it has those rockin' flowers on the front. I mean, c'mon. does it get cooler than that?!?) 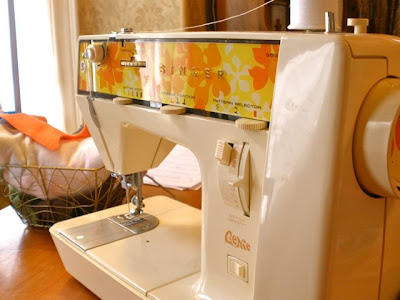 First I measured the length that the finished curtain needed to be, and carefully marked where I would need to cut on the curtain. (See those lovely holes in the curtain? Yeah. Someone accidentally draped the curtain over a standing light once...and it melted. Nice. But the rest of the curtain was perfectly fine, so I hung on to it, knowing I could use it for something someday! The fabric is really pretty semi-sheer fabric that has a slight sheen to it. It's really nice, because it lets light in, like a regular sheer...but it doesn't let in so much that you get blinding light!) 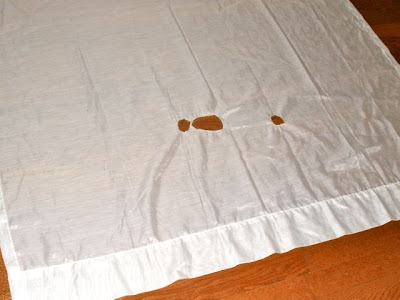 Next, I cut the curtain. I used a very precise cutting method (not!). There's that laziness again. 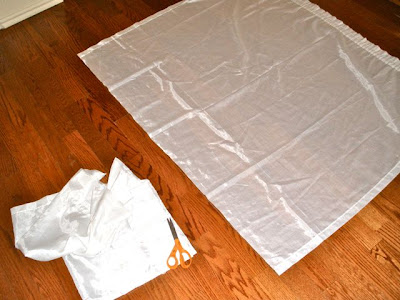 After I cut the curtain I ironed a 3/4 inch hem up on the raw edge. I used a REALLY low setting on my iron...I didn't want to repeat the melting curtain incident again. 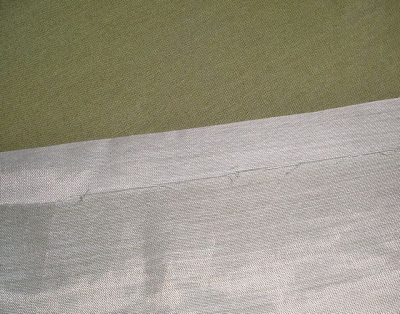 I sewed the folded hem down. (Sorry for the shot of my un-manicured fingernails...I'm just glad there wasn't paint or something else under them...) 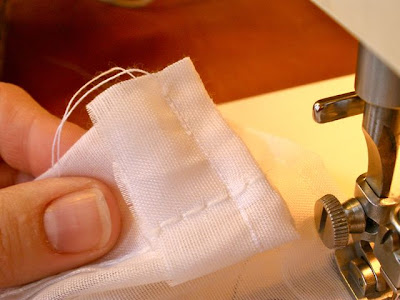 Then I folded it over again...about 1 1/2 inches, ironed it flat, and sewed it down again. I actually sewed right over the first hem line. 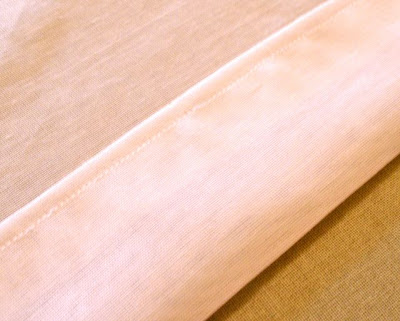 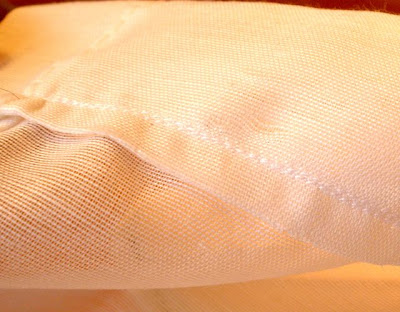 Here's the finished curtain! It looks soooo much better...plus it still keeps out the draft!! Woot! (I know it's nothing spectacular...but it's amazing how little things really change the look and feel of a space!) 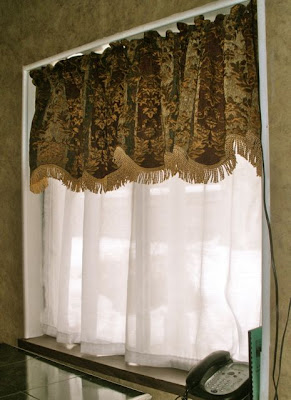 I was so inspired by my quick hem job that actually took down the curtains in the kids' rooms and hemmed them, too! (I had purchased them on clearance last summer, for super cheap, and therefore they didn't quite fit the kids' windows perfectly...but I was lazy, remember, so I didn't fix them. Until now!)